Sheriff's Honors for One Who Dreamed of Joining the Ranks

Two years after Philip Joseph “PJ” Fusaro’s death due to COVID-19, his memory continues to live on as family, schoolchildren and the Suffolk County Sheriff’s Office celebrated his legacy Friday in his hometown of Shirley.

Donna and Phil Fusaro, PJ’s parents, were at times holding back tears during a ceremony at Nathaniel Woodhull Elementary School as Suffolk County Sheriff Errol Toulon Jr. presented them with a special badge and... END_OF_DOCUMENT_TOKEN_TO_BE_REPLACED

On Friday, May 20 the Suffolk County Sheriff’s Office taught an active shooter training and “Stop the Bleed” training for the Suffolk County Legislators and legislative staff. Participants learned strategies to protect themselves and loved ones in the case of an emergency or active threat situation.

A New York sheriff is looking to make a nationwide impact with his new initiative for keeping pets in the community safe.

The Lost Pet Network will enroll pets into a database and provide owners with a printed pet identification card. If an enrolled four-legged friend goes missing, the Suffolk... END_OF_DOCUMENT_TOKEN_TO_BE_REPLACED

This week, TBR News Media had an exclusive interview with Suffolk County Sheriff Errol Toulon Jr. (D). During our conversation with the sheriff, he addressed his battles with cancer, the challenges of steering the sheriff’s department through a pandemic and his surprising place in the history of the New York Yankees.

Sheriff, what is your professional background and how did you land in the Suffolk County Sheriff’s Office?

LONG ISLAND - From Nassau to Suffolk County, law enforcement agencies across Long Island are cracking down on illegal license plates.

"They’re coming from out of state," said Gerard Hardy, Chief of Patrol with the Suffolk County Police Department. "We’re seeing a lot from Texas and New Jersey."

Officials say the plates, made of paper, are used to avoid red light cameras and tolls and to evade law enforcement.

“I am honored to be appointed by Governor Hochul to... END_OF_DOCUMENT_TOKEN_TO_BE_REPLACED 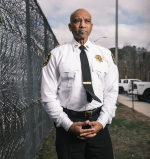 Five years after Donald Trump vowed to end the brutal reign of MS-13 on Long Island, NY, Suffolk County Sheriff Errol Toulon Jr. is doing just that. But it’s also, apparently, pushing one of the country’s most violent gangs deeper into a borough of New York City.

Toulon, the first African American elected to the post, is widely credited with stalling the growth of the gang, which for years had a stronghold in the region.

Space in the Yaphank Correctional Facility will be used to expand a program that helps find jobs and homes for inmates after their release while doubling as a first-of-its-kind intelligence network where officials can share information with leaders of other jails, Suffolk County Sheriff Errol Toulon. Jr. announced Friday as he was sworn into office for his second term.

The Suffolk County Sheriff's Office is donating nearly 450 pieces of bulletproof body armor to Ukraine.
The four pallets of armor will be donated along with medical supplies, sleeping bags and other essentials.
The necessities were collected during the Long Island-Ukraine Emergency Drive.
"We stand with the people of Ukraine and we want to offer our help any way that we can and I'm proud to announce that the Suffolk County... END_OF_DOCUMENT_TOKEN_TO_BE_REPLACED

RIVERHEAD, NY — After a dramatic uptick in mental health issues sparked by the pandemic, Suffolk County Sheriff Errol Toulon and elected officials are set to unveil a new facility in Riverhead Thursday aimed at addressing the escalating need — and curbing crime.

The new facility, to be located on East Main Street, will help East End and Long Island residents with mental health concerns and address a gap in mental health services caused... END_OF_DOCUMENT_TOKEN_TO_BE_REPLACED